Innovation in Higher Ed: It Might Be Happening NOW!

Higher ed in general and the humanities in particular often appear to be ancient behemoths that are unlikely candidates for change–as is true of all large, entrenched organizations.

I choose this focus because it seems more prudent than attempting radical change within existing courses, programs, departments and institutions. Having tried the “change” route of developing new courses and programs on narrow topics such as “Business Spanish” or “Medical Spanish” to accommodate changes in the higher ed climate (decreased enrollments, less demand for grad-school prep & more demand for professional prep, decreased state funding, increased cost for students & their parents–resulting increased debt burdens), I came to the conclusion that broader career preparation should instead be woven into existing courses that have long been part of the higher ed status quo (see earlier post here).  Part of my rationale was that change was anathema to the centuries-old institutions that provide higher education.

But this week headlines in higher ed might be proving me wrong.  Change may indeed be coming to higher education.  On Tuesday, I was thrilled to read about the Minerva Project–an attempt to build an elite university for the 21st century that can accommodate 100% of student demand (unlike existing elite universities that are decidedly not 21st century institution and proudly accommodate a small fraction of qualified students–and an even smaller fraction of the legions who are urged to apply).  Jeff Selingo’s LinkedIn article, “Harvard, Stanford, and Minerva? The Next Elite University at Half the Price” details the features of Minerva, which include: online with a residential component, city as the campus, focus on teaching, and focus on career and job placement.  That last item is, of course, one of my favorites:

“Unlike big universities which have a few career counselors to serve thousands of students, Minerva plans to have a cadre of coaches who will help students figure out what they want to do in life and give them the guidance they need beginning their first year.”

Just as I’d made a note to follow the progress of the Minerva Project, this morning social media was abuzz over Arizona State University’s new  partnership with edX. Twelve first-year courses will be offered online as MOOCs. At the end of the course, students have the option to take a proctored exam after which they can choose to pay $200 per credit for the course to count on their ASU transcript.  Read more about it in Nick Anderson’s Washington Post article, “Arizona State University to Offer Freshman Year Online, For Credit.”

Kevin Carey, author of the recently-published “End of College” is loving seeing some of his ideas made reality in Arizona: 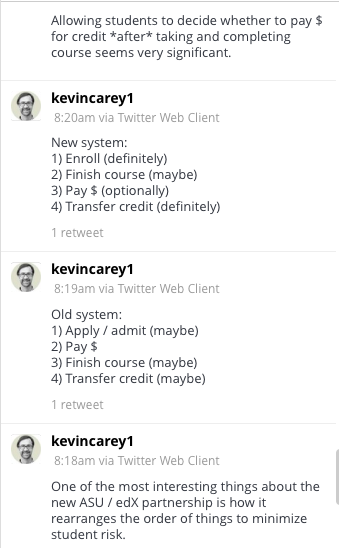 And for all those campuses that can’t jump on this innovation bandwagon, this is all the more reason to make the existing curriculum more relevant to students’ needs beyond campus.  This means some kind of career prep because we are no longer shaping young minds for a future as scholars like us–even though that’s what the existing curriculum was designed to do.

This entry was posted in Careers for Humanities Majors, darcy lear. Bookmark the permalink.