“Conéctate: Introductory Spanish” shipped last week.    Now that it is available to use, I’m excited to share this new curriculum. Some of the features I’m most proud of include:

Authentic Video: We traveled with a film crew to six Spanish-speaking countries–Mexico, Spain, Panama, Argentina, Costa Rica and Miami (Yes! USA is a Spanish-speaking country). In each location, we conducted spontaneous, unscripted person-on-the-street interviews, asking people to tell us about themselves, their routines, their pastimes, etc. After we collected the video, we wrote structured activities around edited clips so that parts of the curriculum were built up around authentic language gathered in authentic contexts.  All of this makes it possible for the native speakers to be featured throughout the curriculum.   Here we see the very first activity on the first page of the first chapter… “¡Hola!  Greeting people in Spanish.”

Students watch and listen as native speakers use a variety of greetings, then choose the correct expression from among four possibilities. The instructions remind students that listening to everyday people speaking at a natural rate might be challenging at first, but they can listen as many times as they need to. And pretty soon, it will sound normal because they’ll get lots of practice!

Active learning:  We put experience with language before study about language so that students are communicating in real contexts. It’s not about language as the object of study.   The activities provide students with something that’s challenging, but interesting enough to pique their curiosity. This gets them engaged, but is not so hard that they become discouraged.   The above example illustrates this: students are given basic biographical information about two famous actors: Gael García Bernal and Javier Bardem.  Then they are given a series of quotes and have to decide which actor would say each one.  This forces students to pay attention to language in context (form-meaning connections) and to engage with the content about the two actors. At the same time, it exposes them for the first time to first person singular verb forms.  In this way, students experience language in use before they learn about verb forms.   Even when they move on to study the patterns of verb formation–those are activities for students to puzzle out.   In this way, students figure out the linguistic system as part of their learning process —before any explicit presentations or explanations. We know this is a better way to learn and study; when you do it yourself, work through the process of figuring it out, engage with content yourself–then you really learn it. Culture is woven throughout Conéctate. We see examples of that in all the images posted here.   The video activity above, “¡Hola!  Greeting people in Spanish,”  features eight people from five countries and appears on page two of the textbook.  In this way, students are immediately exposed to the diversity of the Spanish-speaking world. Famous movie actors from Mexico and Spain, Gael García Bernal and Javier Bardem, are integral to the presentation of present indicative, which is pictured above: “3.1 Vivo en España. Present indicative: Singular forms.” 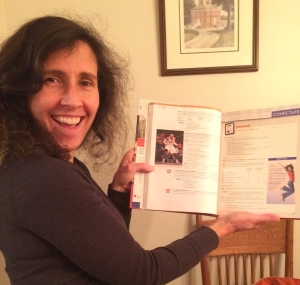 And the chapter four reading pictured at right, “¡Leamos! La edad dorada: de 25 a 34,” is a clipping from print media in Spain.       Other examples of culture from the Conéctate curriculum include:

This entry was posted in darcy lear. Bookmark the permalink.