When Is It Good To Use a “Trivial” Example in an Interview? More Often Than You Might Think!

Site of The College of New Jersey workshop on February 26, 2014.

One common topic at workshops I lead is: answers to commonly-asked interview questions.

“Tell me about a time you failed at something.”

An example that I often use is:

When I was in Spain, I quickly learned about the traditional greeting, “besitos,” that is air kissing on the cheeks.  I understood that you kiss the air to the side of the other person’s cheekbones and don’t actually put your lips on anyone’s face, but a few times I had the awkward experience of almost kissing people on the lips. I asked a friend if it was customary to always go right & put left cheek to left cheek first, then go left.  She had to think about it because it was so ingrained to her as a Spaniard that she had never considered it, but the answers was “yes!”

With my host at Brown, Siliva Sobral.

At Brown, a student asked if one shouldn’t apologize for using such a trivial example.  The answer to that is: you shouldn’t just use the example. The onus is on you to connect that clear, concise, detailed, story to the specific qualifications the employer you’re addressing seeks in a candidate. In this case, you might say:

This answer shows that I am culturally sensitive and self-aware. I recognize my mistakes and take action to correct them.

It also shows that I am good at perceiving patterns and making others aware of them in a collegial way.

You must have both:

a highly specific example, which might seem trivial on its own, but without which you have nothing to back up your claim that you possess the desired traits AND

an explicit connection to the specific qualification the employer wants (whether an ability to behave in culturally appropriate ways in a variety of contexts; an awareness of your own mistakes, a willingness to correct them, and the knowledge of how to do so; or collegiality and teamwork skills), without which you only have a “trivial” example. 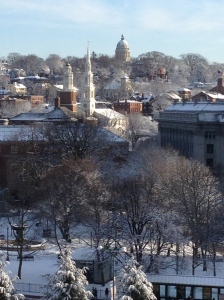 This is a problem I see often with young graduates: they either parrot back the traits an employer wants, which amounts to an empty claim or they give an excellent example, but fail to explicitly connect it to desired qualifications, thus rendering the example impotent.

Remember: What you think is a trivial example is often exactly the thing that makes you compelling–you have to step outside of your own experience and see what your unique skills, talents, and expertise are.

BUT don’t use only those examples–those personal anecdotes should be limited.   You start with the specific (“trivial”) anecdote that shows you have the experience you claim to have.

THEN you have to explicitly say what you extracted from that experience–something generalizable that you can apply to other situations.

FINALLY, you have to say how you will apply that knowledge at the specific company or organization.

While covering this topic at The College of New Jersey, a faculty member piped in, “but what if the question is, ‘what is your  biggest weakness?’ You can’t use that example about the ‘besitos’.’”

But neither can you say “My biggest weakness is that I procrastinate.”

This gets to the heart of why the anecdote is so valuable for answering these specific job interview questions.

For example, instead of say that my biggest weakness is that I procrastinate, I could say: “the first time I went to lead this workshop, I finalized my PowerPoint slides the night before and the next day I projected the following typo:  “I learned to pay attention details.”

Obviously not true if I forgot the detail of the word “to.”

It’s a story that is funny & self-depricating, but then I can say:

“From that experience, I learned the importance of preparing final drafts more than 24 hours in advance of the event so I’m not doing it at the last minute and I have time to go back through and just check for typos.  Plus when I have extra time, it’s more likely that someone else will have time to look over my materials before I present–and it’s always better to have 2 sets of eyes than one if possible.“ 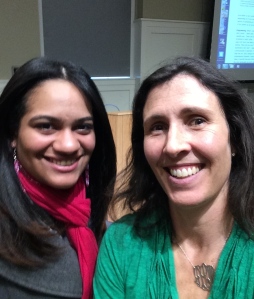 With a workshop participant at The College of New Jersey.

You have to show that you aware of your weaknesses and taking measures to correct them!  And remember: you cannot separate the story from its lesson. You always have to tell the story and then connect it to the broader lesson–and even connect it further to the specific organization with which you are interviewing.

Darcy Lear is a career coach specializing in job search documents, professional school applications, and interview preparation. For one-on-one support in preparing for your job search or to set up a campus workshop, contact Darcy: darcylear@gmail.com

2 Responses to When Is It Good To Use a “Trivial” Example in an Interview? More Often Than You Might Think!